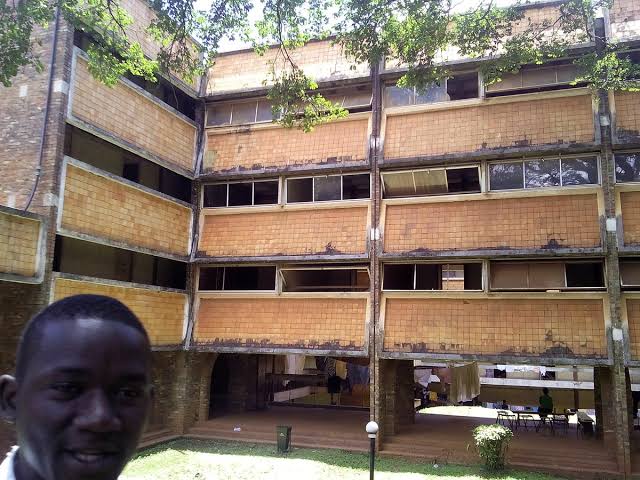 Makerere University, which is Uganda’s most prestigious and one of Africa’s top universities, also possesses the most dilapidated buildings in dire need of a makeover.

Lumumba Hall, the most prominent for male students for decades was built in the late 1960s and was opened in 1971.

Right now, it houses more than 100 students who have to endure poor sanitation as a result of broken toilets, due to a broken drainage system.

“When it rains, rooms leak… They’re not comfortable,’’ said Joel Seguya, the chairperson of Lumumba Hall.

He added that the situation would pose an electric shock hazard, especially if an electric appliance got in touch with the water.

Despite the fact that students still converge around the building housing the Peace, conflict and resolution center, it is evidently on the verge of collapse.

According to the Guild President, Shamim Nambasa, the amount allocated towards the maintenance of the institution is too little to keep it in good shape.

“The annual budget has about Ugx 1.2 billion to cater for all the 10 halls of residence. That’s very little money to renovate even just one building,’’ she said.
However, the Vice Chancellor of the University, Professor Barnabas Nawangwe has given assurance that major renovations are underway.

“We will be doing major renovations on these buildings and particularly, the halls of residence on which we’ve been doing a lot of work, particularly plumbing,’’ he said.

With the increase in the number of students, most of the halls are hosting more people than initially intended, a situation that has forced students to dig in their pockets and make minor renovations themselves, according to one student.

According to Nawangwe, they have received assurance from the government that these buildings will be renovated.

“The President has given a directive that money should be found to renovate our halls of residence, medical school, and also to complete the fencing,’’ he said.

Looking forward at their centenary celebrations, Makerere University seeks to renovate these buildings with the time and finances available. However, the timeframe might not be enough since the celebrations will start on October 8, 2022.

Some students have remained skeptical, saying that the University’s administration has always been making such promises before, but has never fulfilled them.